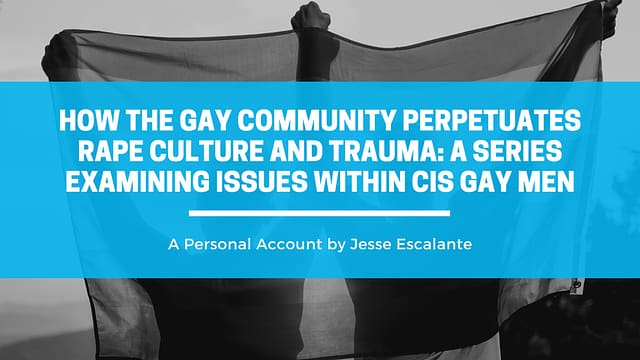 Trigger warning: I will be going into detail regarding my own personal experiences related to the topic.

ANOTHER TRIGGER WARNING: For all my fellow gays that will feel attacked by these posts. Grab some water to cool ya down and let’s get into it.

I want to say now before I continue any further that this is all pulled from my own life experiences and the intersectionality of my identities. I do not speak on behalf or for any marginalized group. This is my authentic observation and in doing this, I hope to find others like me. Be prepared to challenge your views and perspectives. Allow yourself to shift the narrative. And if any of that sounds like too much for you, then yes, you’re part of the problem.

I am a beautiful and complicated blend of many things. In a quick summary, I am Latinx, gay, queer, artist, activist, dancer, first generation soon-to-be-MSW student at UC Berkeley, and most importantly, a product of social inequalities that have all told me one singular- narrative my entire life: you are good for your body, sex, and drugs.

First let’s look at how I first learned this and then we can discuss how aspects in the gay community perpetuated it. Again, just because this is my specific story, does not mean it’s not happening to others.

Around the age of 11, my dad was deported. In the middle of the night, cops broke down our door and took him from me (literally as he had me wrapped in his arms). During this time, I had to live with close-enough family friends that I consider my aunt, her brother, and cousins. This is where that trigger warning comes into play.

This period of time taught me that my body was all I was good for when the person who was to care for me, molested me. And my late aunt’s brother taught me about abuse in every type. And yet, his attention was all I craved. Which makes sense. My single father, who is essentially my hero, got stripped away and I needed someone to pay attention to me.

I learned that as long as I kept my mouth shut, I would finally get touched by the only male figure in my life. How do you explain to an 11 year old they have fallen in love with their predator because their own father figure could not be there due to the complicated situation of simply being Mexican? I’m still waiting for the answer myself.

Moving to San Francisco for school was my dream since 16 and to this day, I do not regret any decision I’ve made as far as moving here and anything I’ve done since. This is my home and I love it dearly. But just like my childhood, no home is perfect. Moving here for school at 18 was a dream I never thought I’d make come true. I could finally be myself and be accepted into a community that fosters art, creativity, and intellect. Boy, was I in for a wake-up call.

San Francisco and the gays that inhabit it taught me something profound about touch: apparently you can touch whoever you want, whenever you want. It took me a while to understand the social norm that has been normalized as “cruising” culture within gay spaces. This is an old way of thinking and behaviors established in the 1970’s when homosexuality was deemed socially unacceptable and you would slightly touch another man to let them know you were into him. Unfortunately, people forgot we are now in a different millennium and we can use simpler techniques to approach someone, like actually saying “Hi” or messaging them on Grindr for most. But instead what we get, is gay men perpetuating rape culture by thinking they have rights over my body simply because they find me attractive. I’m here to tell you, you do not. Not today, not tomorrow, and not ever. To all the men that have ever groped me, slapped my ass, put your hand down my pants, all without consent: Fuck. You.

But here’s the thing, it took me so long to become comfortable speaking up. I come from trauma and abuse and all I’ve ever known is to not speak up. And the harsh reality is, this is true for so many POC who leave their broken homes in hopes of finding sanctuary in cities like San Francisco. So yes, when we as a gay community normalize groping and assault, we are perpetuating trauma. It does not matter if someone knowingly attended Powerhouse’s Underwear night or dressed up in a cute jock strap to a Glamcocks or Comfort and Joy Party, you do not have the right to their body Mr. I-Took-To-Much-Drugs-And-Can’-Handle-Myself. And if you are a venue or a party host, YES, it is your constant duty to establish a safe space where consent is enforced.

I will never forget when I vocalized this frustration to a coworker and they said I can’t complain because I was wearing a jockstap, which is essentially an invitation. My own sexual expression and liberation was apparently an invitation for assault. I’ll never forget washing my hands at a party at Public Works and in front of a long line of men, a full grown adult slaps my ass and whispers in my ear “Great ass.” I felt humiliated, disgusted, and degraded. I responded by yelling at him “ Consent? Ever heard of it” and left. In that moment, I found my voice for the first time.

Weird, I’ve heard this story before. Or something like it. I think a lot of predators consume alcohol or drugs before they attack their prey, I know mine sure did. So what makes us as a collective community any better than my uncle? And you can sit here and say you do not participate in this behavior, but we all attend spaces where this is normalized. So yes, if you’re seeing it, doing it, or attending events where it’s happening, and you chose to ignore it, you are perpetuating TRAUMA. Speak up. I only spoke up for myself because I had been pushed past my limits and had a public breakdown inside the Public Work’s bathroom. But was that really necessary? Can’t we, as a collective community, decide to do better than that and not teach young gay men that non-consensual touch is okay? Especially when so many gay men of color come from homes similar to mine.

A powerful moment I had after the incident at Public Works was when my female friend commented on my strength to speak up because she wasn’t sure she could do the same. And in that moment, I realized my privilege. As a gay cis men, I have the privilege to speak up when assaulted when most women don’t. I realized not only is it my job to speak up against assault, gay or not, it is all of our job. When you fail to speak up and hold privilege, you let that person continue the cycle and assault others more vulnerable. It is your duty, gay cis men, to stop normalizing rape culture that predominantly affects POC and women, and start speaking up. Because as much as I love to talk, I’m tired of being the one to speak up constantly about this.

In hindsight, some of the very first things I learned coming into this city is that vintage looks great when it comes to fashion, but let’s leave grabbing my ass without consent behind. I learned that attention from guys is great and exciting and sometimes overwhelming and unfamiliar. I learned that just because we are gay, we do not get a pass on perpetuating patriarchal, sexist, and abusive norms. It took me a long time to learn to speak up for myself, but I’m glad I did. So no, I do not care what era you grew up in, your intent, or the substances you put in your body, GAYS (Yes, you. And you. And definitely you to the hot muscular guy who thinks they can grab whatever they want), ask before you touch me or I will call you out or knock you back the same way I wish my 11 year old self did all those years ago.

Jesse Escalante is a 25 year old San Francisco resident. He identifies as a queer Mexican-American and uses he/him/his. Currently, Jesse goes to UC Berkeley to pursue his Master’s in Social Work. He hopes to work in the mental health and substance use field with a strong emphasis on Harm Reduction. He is also a contemporary dancer and has a B.A in Sociology and Dance.