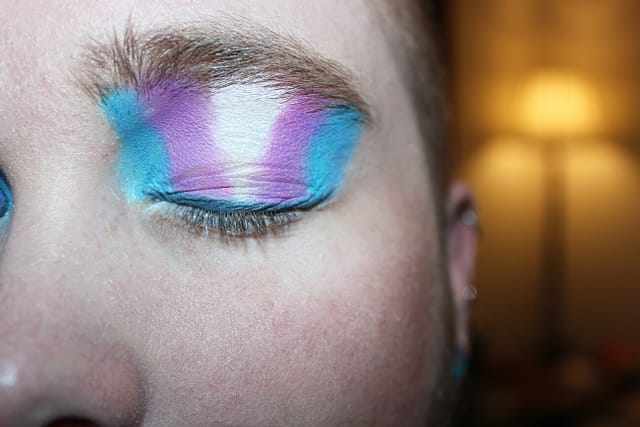 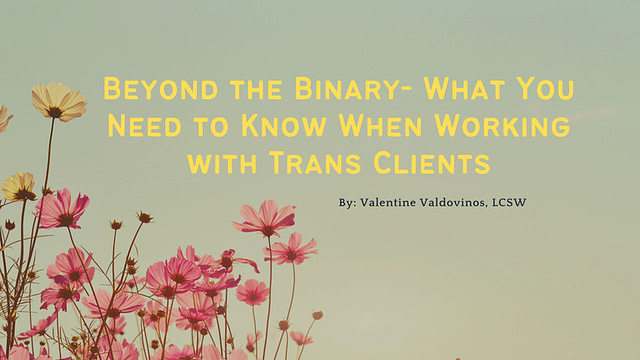 One of the first things I learned when I started college was how to deconstruct the binary beliefs that we’re all taught are immutable. What I learned was that life as I knew it was much more than either one way or the other; it was more than a binary. I learned the gradations of gray in the black and white world of man or woman, logic or emotion, body or mind, heart or brain, good or bad, etc. What resonated the most was the deconstruction of gender. I finally felt seen, heard, understood, but what was more than that, I finally recognized who I was. I hope to share a small fraction of all that I have learned so that perhaps it helps others when working with Trans and/or Non-Binary clients.

The first and probably one of the most important things to know is that Sex and Gender are absolutely not interchangeable terms! Sex is the categorization of a person based on their reproductive anatomy/organs, also known as their genitalia (even then, sex itself does not exist in a binary vacuum; there are at the very least 5 possible biological sexes). Gender is a label constructed based on a person’s assigned sex at birth that stereotypes a person into specific roles, mannerisms, and quite frankly is riddled with expectations. Why is it important to know this difference? Essentially our body parts do not truly dictate our mannerisms, personalities, or what we achieve or do in our life. Using these two terms interchangeably would be like assuming that because I have 5 fingers in each hand I must surely plan to wear gloves. When it comes to working with clients, it is important to know the key differences in these because while they are both quite personal, they mean very different things and refer to very different aspects of our clients’ lives.

Perceived gender is when we attribute or assign a gender to a person based on our perception of said person. This is often something we do according to secondary sex characteristics, colors, clothing choices, etc. Perceived gender is not always accurate which is why it is important to not assume someone’s gender. Knowing that gender isn’t just one or the other and that it is not at all linear, but rather that it exists on a spectrum had the biggest impact on me. Recognizing this can be very helpful when working with clients seeing as there is more to someone than what we perceive. The way we express our gender is usually tied to mannerisms/behaviors, choices made in outward appearance, and the like. Essentially there are innumerable forms of gender expression and mannerisms. For example, there are feminine women, gender-neutral women, masculine women, masculine men, gender-neutral men, feminine men, and various combinations of all sorts. So when we meet a new client, it is best to avoid assuming that the gender expression we perceive is that person’s actual gender identity.

Gender identity is self-determined and can only be self-assigned. Gender identity is what someone states as their gender. It is not a choice, it is not a preference, it is not a phase, etc. It is factual and should be taken as such. When someone provides their gender identity they are establishing their right to proprio-descriptive language. Meaning, they and only they truly know their own gender. Imagine if I came up to a Black person and said “you aren’t black,” or if I went up to a parent and said, “you’re not really a parent.” Not only would this be audaciously rude, but it would also be condescendingly oppressive. For this reason, saying to someone: “you’re not a (insert gender here),” is damaging and problematic. Respecting any given person’s gender identity is as simple as knowing who you are. If I decided to declare you as the gender that does not coincide with your identity, would you accept that or insist that I am incorrect? Just as I cannot decide for you, you cannot declare anyone else’s gender “correct” or “incorrect.”

It is also extremely important to note that gender identity is not always directly/linearly tied to one’s assigned sex at birth. Meaning someone assigned male at birth (AMAB) may not identify as “boy,” “guy,” “man,” or any other masculine label. Equally, someone assigned female at birth (AFAB) may not identify as “girl,” “lady,” “woman,” or any other feminine label. A person who was AFAB that is transgender is a Trans boy/guy/man/etc. A person who was AMAB that is transgender is a Trans girl/woman/lady/ etc.

I know this is a statement that could be further elaborated upon, but I wanted to give a quick nod to Non-Binary folks. A Non-Binary person may or may not choose to identify as a Trans person.

Personal pronouns will take us back to grammar. These are the words that take the place of a person’s name. The common dichotomous pronouns are she and he as well as their respective counterparts: her/hers and him/his. When someone has a “masculine” gender identity we would use the respective “masculine” pronouns of he/him/his. Likewise, when someone has a “feminine” gender identity we would use she/her/hers. What of those of us who are gender-neutral or are altogether Non-Binary? Here is where some people get confused or even conflicted. Before we get into it though, a little exercise:

Imagine you walk into your local café or eatery. You sit down, you are ready and excited to enjoy your beverage and/or food. At a glance, you notice a forgotten pair of reading glasses. What would you think? What would you say to yourself?

Did you think “someone forgot their glasses,” or did you gender the person: “he forgot his glasses?” I’m going to take a wild guess and say, since you do not know who those glasses belong to, you will have possibly thought the former. What if you wondered whether the owner would return for the pair? Would you say “I hope she comes back for them,” or would you most likely say “I hope they come back for them?”

This exercise was to demonstrate that it is quite simple and I would even argue that it is almost second nature to remain gender-neutral when we do not know someone’s gender. Of course, there will be those people that claim “I just use both in a sentence: ‘I hope he/she comes back for them.” Now let’s be honest, which is truly more grammatically awkward? This being said, when we meet a new person, and since we know not to assume or assign someone else’s gender, it only makes sense we would stick to the gender-neutral pronouns of they/them/their.

Neo-pronouns are modern pronouns used to replace and even abolish the gendered nature of pronouns altogether. Some common neo-pronouns I know of are ze, zir, zee, hir, hirs, but there are many more. Some people even have their own pronouns specific to them and only them. I knew someone whose pronouns were fae/faes/faer. When it comes to clients that may have neo-pronouns, the key thing is to always make sure we are asking the client for their pronouns and doing our very best to use the correct pronouns. Again, our very best. Not to be mistaken with the very least. Neo-pronouns may require that we ask people to update us of any changes to their pronouns since there is a possibility that they may use different pronouns at different times.

Additional notes on the importance of pronouns:

Not all Trans and/or Non-Binary individuals seek to transition and some may choose to only partially transition.

Transitioning is the process that is undergone to outwardly present one’s gender identity. One may socially transition which is the process of introducing themselves to other people with their name and pronouns. They may choose to legally transition, which is the process in which a legal name change is done and the required documentation is filed to have their name and gender markers changed on any pertinent legal documents such as social security, licenses, passports, etc. People may choose to medically transition. This may or may not include Hormone Replacement Therapy (HRT) and gender-affirming surgeries of various forms.

As providers, we may be asked to write “letters of support” for their transition needs. In these letters, we must be intentional about what information we do and do not provide. It is not a right to know what a person’s transition has been or will be like if you are not specifically being asked to write a letter. In other words, just because we are working with a Trans and/or Non-Binary person doesn’t mean they are required to tell us about their transition plans, past, or future. It is ultimately their decision what they wish to share. When a “letter of support,” is requested then we may need to ask for relevant information from the person, but this is the only scenario where we need to know their history and plans.

I hope that the above information has been helpful. It is always my pleasure to talk about this subject and help others learn about the Transgender community. As someone that learned from others, I hope that I can continue to help others become more enlightened about these concepts. In my private practice, I not only work within my Trans/Non-Binary communities, but I also provide seasonal online webinars, one of which is a Trans and Non-Binary 101 webinar. This webinar aims to help clinicians of all types who have little or no knowledge/experience in working with Trans/Non-Binary clients. I cover some of the above in greater detail, as well as other concepts and details that are more clinically specific. I hope you feel welcome to check out my website or my Instagram which I will include below:

As always, please never forget that there is always a place for you at A Safe Space!

Hey there! I am Valentine Valdovinos, a Licensed Clinical Social Worker (LCSW) in California.

Envisioning my professional goals began in the city of East L.A. -a predominantly Latinx community. As an out, Non-Binary, Queer Person of Color (QPOC) in high school with conservative and religious parents, I faced many struggles that inevitably had effects on my mental health. The saving grace? I met a therapist that made an indescribable difference in my life. I wanted to offer the same hope for others as she did for me.
Now as a therapist myself, my practice is person-centered and non-judgmental across several subjects, domains, circumstances, and themes. I also pride myself in being multi-dimensional in identity politics; I am Trans-Affirmative, LGBQ+ Affirmative, Sex-positive, Body positive, Kink-positive, and more. Areas in which I provide services include but are not limited to issues concerning: Depression/mood, Anxiety, parenting, couple/polyamory/relationship dynamics, sexuality, gender identity, sexual identity, and kink/BDSM involvement.

I always look forward to working with anyone, and there is always a place for you at A Safe Space!