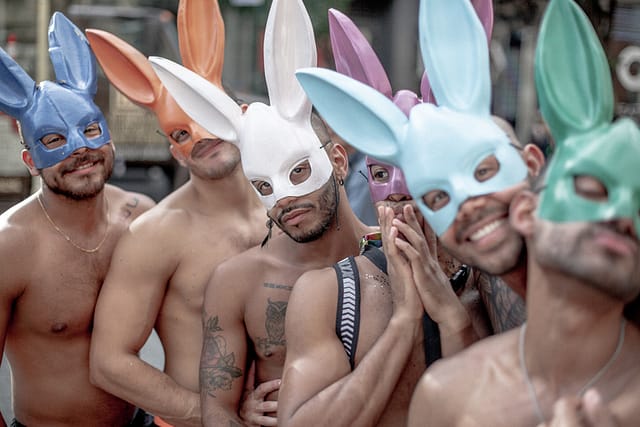 How the Gay Community Perpetuates Racism and Homonormativity: A Series Examining Issues Within Cis Gay Men 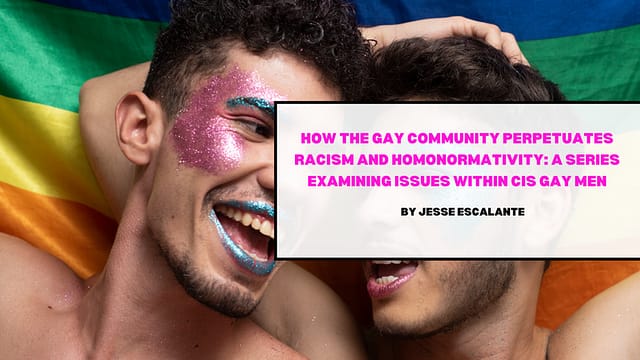 Being a part of the Queer and Latinx Community has taken me on one of the most complex and rewarding journeys one could ask for...

At the age of 14, I began to question why I not only was attracted to mostly white men but also why I strive to be like them. At the age of 16, I dyed my hair lighter and loathed the way my skin would tan during the summer. At 19, I had an unhealthy obsession with changing my body to become more masculine and developed low-self esteem. Now at 24, I feel disconnected from those parts of me that told me being a feminine gay man of color was wrong

As I became more educated in queer studies and curious about the norms that define sexuality, I realized the shame I carried for so long about my skin color and personality was due to homonormativity.

Homonormativity creates a hierarchy in the gay community that places gay men of color and feminine men at the bottom, which negatively affects their own self-acceptance and social integration.

And how do we as a collective community perpetuate racism and homonormativity? Let’s get into it.

Let’s first start off with the oh-so-famous…. Grindr.

Grindr is infamous for perpetuating hate speech. Many profiles linked with “into masculine guys only”, “not into/only into Asians”, “no blacks/or looking for a BBC”, “love Latins/or looking for Latins with foreskin”. If you’re thinking “ew”, you are not alone. Anyone who abides by these constructs and uses the word “preference” as an excuse is perpetuating racism and homonormativity.

A preference, yes, is a preference but it is important to examine where that comes from. As a brown queer feminine cis men, I’m here to tell you I am NOT here to fulfill your racist fetish. I have personally been told by white gay men they only found me attractive because I am brown and therefore there is a higher chance of me having foreskin. Foreskin or not, I am a fucking human being with a personality and that is where your preference should be. Get the picture now?

The ways in which white gay men must compensate for some sort of insecurity by fetishizing black men and their penis is beyond me. It must be for the insecurity that black men are multi-talented, passionate, artistic, and kind human beings while white gay men (yes, may have all those same attributes), have borrowed aspects of other cultures, and deemed it their own. From the slang to the gestures, to the cultural aspects the gay community has indoctrinated from the black and trans community to the fucking Stonewall Riots, we owe our legacy as a gay community to Black, Brown, Trans, and Gender Queer Folkxs, yet, we have the audacity to reduce them to a sexual object that is disposable after your 30-second sexual endurance? Girl, BYE.

I sincerely hope if you are gay and reading this that you stand with #BLACKLIVESMATTER. If you do not, please cancel and then educate yourself. Black lives matter because they fought for Queer lives to matter. Without the persistent fight for liberation from Black and Trans folks, we would not have a queer liberation. INTERSECTIONALITY

Let’s talk nightlife. Phew. I already feel my blood boiling. You should too. The way in which white owned bars love to host “Asian nights”, “Latin nights”, or “R&B nights” as a direct way to tokenize and profit off of these preferences without even celebrating the cultures that bring in revenue is…frustrating. For example, I have been to Beaux’s or Badlands Latin night multiple times and what do I see? Light skinned Latinx and white go-go dancers. Are you kidding me? And yes, they are all muscular and mostly cannot dance. Do any of your proceeds actually go towards Latinx organizations or helping families at the border? I highly doubt it. Being Latin is a wide-range of cultures and expression. It is more than your pinatas and Cinco De Mayo decorations (and no, you may not wear a sombrero for Cinco De Mayo or paint your face for Dia De Los Muertos if you are not Latinx).

And here is why:

You get to chose to put that costume on. I don’t. You can take it off when it no longer benefits you. But for me? I wear that “costume” everyday whether I want to or not. And usually it brings along trauma, racism, deportation, detention centers, and death. I’m sure you do not want that part of the culture right? Let us not forget there are STILL kids separated from their families and in cages.

Another aspect of nightlife culture is advertisement and who it is marketed towards. Who is it that you mostly see on ads for gay nightclubs? White muscular men. And there’s a reason for that. Homonormativity. In essence, these advertisements are showing us what is attractive and what we should focus our sexual attractions around. The lack of representation of gay feminine men with body diversity within gay spaces is directly saying to us that we do not matter. That diversity is not attractive and whiteness, like skin color and personality type, is deemed as more desirable.

Homonormativity shows up in our media. It shows up in predominately white gay movies that show gay men as only struggling with coming out. Gay movies focus solely on the experience of white gay men and the ways their coming out journey may look like (Love, Simon, Call Me By Your Name, Brokeback Mountain, Boy Erased, Holding the Man, Queer as Folk, and many, many more). We, as gay men of color, do not get authentic stories of our journeys and our experiences. We face more than just coming out. We face deep trauma, racism, classism, transphobia, femme-phobia, and sizeism at a disproportionate rate than white gay cis men. We get a few stories such as the award-winning and remarkable Moonlight, but one movie isn’t enough. We need a generation of stories the same way white gay men have theirs.

We are living in a time where silence equates to violence and not speaking up towards these issues makes you compliant to discrimination. We need to stop making excuses and start taking actions towards inclusion, representation, and authentic activism. No longer are the days of white activism, but it is time for intersectional advocacy. Homonormativity is the plague of the gay community. It is the plague we all know of, yet do not want to talk about. Well, I’m saying enough is enough. It’s time to speak up and speak out against any space, person, idea, website, app, TV showed, or movie that only shapes the gay experience as a white gay masculine one. The gay experience is diverse, multi-faceted, complex, and most importantly, full of color.

Jesse Escalante is a 25 year old San Francisco resident. He identifies as a queer Mexican-American and uses he/him/his. Currently, Jesse goes to UC Berkeley to pursue his Master’s in Social Work. He hopes to work in the mental health and substance use field with a strong emphasis on Harm Reduction. He is also a contemporary dancer and has a B.A in Sociology and Dance.