Representation Of Poverty in Sesame Street

This morning I was scrolling through my Facebook feed and I found a post that really surprised me. It was about Sesame Street introducing a puppet named Lily. Now Lily wasn’t just a new friend in the neighborhood, rather she was introduced to represent children experiencing poverty.  The character of Lily first made it onto Sesame Street in 2011. Along with introducing a child’s perspective on poverty she also introduced viewers to a broader range of topics such as food insecurity, resources like food pantries, food kitchens, and school food programs. Over the years Sesame Street has helped children understand different complex social issues from divorce, child abuse, domestic violence, to broader community violence. In many ways, Sesame Street has given a voice for children going through difficult situations. You see, young children often don’t have the capacity to express themselves verbally. Even if they can speak, most children are not capable of expressing complex experiences like many adults. As a result, children often “act out” or “misbehave”. The reality, however, is that all behavior has meaning. Unlike adults, children’s brains are still developing along with their coping skills, emotional regulation, and social skills. (1) “Watching Elmo or Big Bird talk about their emotions can provide comfort to children coping with big feelings of their own.”

How Does Poverty Impact Children?

Poverty is something that can happen to any child at any given time. It is not uncommon for families to find themselves struggling financially due to lack of employment, mental/physical disabilities, or medical issues to name a few. Research tells us that children who live in poverty are impacted across the lifespan. For example, children in poverty don’t always have access to quality education, nutrition, or safety. In Dr. Nadine Burke Harris’ book titled “The Deepest Well”, she explores the impact of ACES (Adverse Childhood Experiences) not only on children’s mental health but their physical health. What she found was that children who experienced things such as domestic violence, community violence, poverty, divorce, etc. were more likely to deal with chronic health issues as adults. Dr. Harris’ work has showcased the impact of these experiences on children living in low-income communities such as San Francisco’s Bayview neighborhood. As a result, it can be argued that poverty is at the center of many children’s long-term physical and mental health issues. Sesame Street’s mission to showcase these issues to the general public is one way that media can support a broader understanding of how poverty impacts one of our most vulnerable population.  (2)”I think we tend to think of homelessness as an adult issue and don’t always look at it through the lens of a child, and we realize that Sesame has a unique ability to do that, to look at tough issues with the lens of a child”. There is a lot of statistical evidence around the prevalence of childhood poverty. According to Children Incorporated (3), “About 15 million children in the United States, or 21%, live in families with incomes below the federal poverty threshold”. Along with this, “Almost 40% of American kids spend at least 1 year in poverty before they turn 18”.

Poverty is a very stressful experience for the whole family, and children experiencing it might not even fully understand what is taking place. Over the past few years, I have worked with a lot of families who were experiencing some form of homelessness. When we think of homelessness we think of someone living on the streets, but forget about the families that are living in shelters or doubling up with family/friends and/or renting a room because that is all they can afford. For young children, consistency and predictability are important components of healthy growth and development. When a child is experiencing homelessness and poverty, they are forced to adapt and create meaning around an ever-changing environment. This can potentially lead to increased levels of stress and anxiety in children that translates into behavioral problems.  (4) “People who have inadequate resources are more likely to battle with depression and anxiety, and to feel constant assaults to their self-esteem as they compare themselves to other people who are more successful”. Even though it is difficult to think about, this is also true for children.

As a teacher, one of the things that we implemented in the classroom was building skills around social and emotional learning. Even though the children were still very young, we were setting the foundation for empathy, emotional recognition, and self-regulation. The children were learning that their feelings had a name and that they were valid.  It’s important to take into consideration that the approach will be different based on the children’s age and developmental stage.  Because the children in my classroom were younger, the three feelings we focused on were happy, sad and angry.  We also used stories and had age appropriate conversations during circle/group time to help the children grasp the concept better.  To reinforce this knowledge whenever these emotions would come up for children I would use the same language and eventually the children were able to begin to name what they were feeling.

Having safe and developmentally appropriate media is important for all children. Not only can media provide educational programming, but it can be used as a tool to help children learn how to talk with trusted adults about what they are experiencing. Quality media can also be used as a tool by mental health providers to when working with children and families. At a time when we consume countless hours of media a day, having something like Sesame Street provides an alternative to the numerous cartoons available for children.

“Home is where the love is; and you can take that love and hope with you wherever you go” 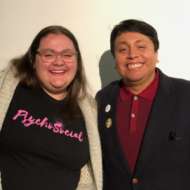